The Blueproject Foundation presents the exhibition “Future Relics” by Elena Lavellés, the third resident artist of 2018, which can be seen at the Sala Project from July 13 to September 30, 2018.

“In this new body of work, Elena Lavellés continues her preview exploration on the three forms of gold (mineral, hydrocarbon and precious metal) to develop a discourse which reveals the interactions between transformation process, local history and the power relations of corporate capitalism.

As a starting point, welcoming us at the entrance, we find a work inspired by the Breton Woods treaty, gold-plated by hand. The renowned book is the result of the 1944 agreement, which established the free-trade policies which have governed the world ever since, together with the resulting establishment of the World Bank and the IMF and the consolidation of the dollar as the main international currency.

The other works unfolding after this one are grouped in three sections: a series of relic-sculptures, a set of drawings over topographic maps and a selection of photographs. The artist invites us to re-imagine in between two waters, the land of the imaginary and that of the real. The land of utopia and that of dystopia, an approximation which implies social resistance and the alternatives to contemporary established and dominant processes.

The triad of materials used (gold, oil, and coal) constitutes the foundation of the three installations, which resemble reliquaries, that Lavellés created by reusing discarded waste of the aforementioned materials, suggesting their future disappearance or, at the very least, inaccessibility. If we carry on at the actual rhythm of the so-called Anthropocene, with time any object made up from any of these three materials will become an object of historic interest. The artist also establishes a relation between the religious character of relics and that of capitalism, comparing their viral condition. As Frederic Jameson pointed out: “It is easier to imagine the end of the world than the end of capitalism.”

To emphasize these connotations, Lavellés shows these materials in reliquaries and, furthermore, offers to sell custom-made artworks to be realized with the gold, oil, and coal used in the exhibition, once the exhibition has ended. It is a way to underline the necessity of understanding the dramatic future of a planet of limited resources and the necessity of changing the way we inhabit it.

The drawings are made using topographic maps of the cities and surroundings of Ouro Preto (Brazil), Ciudad del Carmen (Gulf of Mexico) y Gillette (U.S.). The three areas are examples of scenarios which have suffered and suffer the consequences of the mining of the materials in question, what David Harvey has called “the resource curse”.

Maps have always served the purpose of abstracting the materiality of territories and spatial relations. We shouldn’t forget the etymology of the word “Geo-graphy”: earth-writing. Lavellés is truly recovering the original and symbolic meaning of the word. Maps become displays of the dynamics of petrocapitalism and the conversion of resources into the capital flow.

Furthermore, the paper which Lavallés has selected is Khadi Papers, imported from India, which sooner or later will also become a relic, due to its disappearance or its high price once fossil fuels run out. By using this kind of recycled and fair-trade paper, handmade using old medieval techniques, the artist shows the importance she gives to recycling processes and traditional methods of production as tools of resistance against capitalism and its devastating consequences.

Gold, oil, and coal come out gently from small holes which the artist cut in the map, a metaphor of the erosion of the land produced by men through mining.

With the photographic section, Lavellés leaves the symbolism of the other two series and distances herself from the field of allegory. The images show the real impact of mining activities over the real landscape. There is no playing with the viewer, the message is direct and clearly shows the consequences of the exploitation of the land, not only through degradation and extinction but also through contamination and exploitation of human resources. Two of these pictures show what is still called a “natural disaster”, a real paradox since there is nothing “natural” in the mud and chemicals wave which fled from a breach in the dam of this mine. One of the pictures shows the marks left by the wave, while the other focuses on the remains of a house in the Bento Rodriguez village, severely affected by the catastrophe and reduced to a ghost town.

As Rosi Braidotti reminds us: “We cannot forget the tight link between the neoliberal political economy, the variety of exclusion discourses and practices, the marginalization and elimination of entire layers of human population and the devastation of non-human agents and of the planet in its very sustainability”.

The exhibition as a whole shapes a landscape through the three materials which imply multidimensional exploitation – of men and of the territory – and whose impact can be traced from slavery to the present. This way it offers us a reading of the implications of the colonization of nature, throughout which thousands of people were displaced for the use of the territory by multinational corporations for the benefit of the global north.

Thus it becomes clear how every landscape is political and how political ecology and artistic experience are intrinsically connected through the paths which they both offer to understand the interactions between the environment and the economic, social and political.” 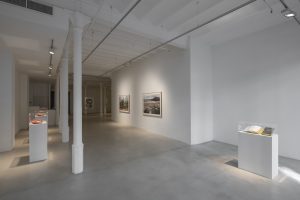 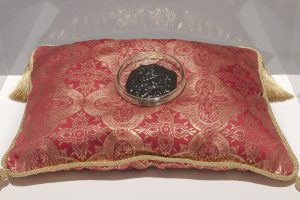 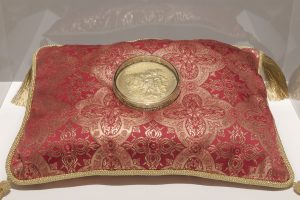 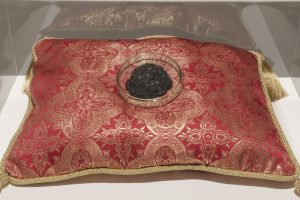 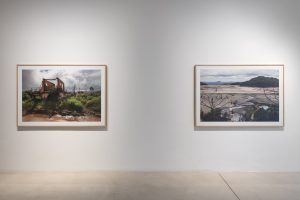 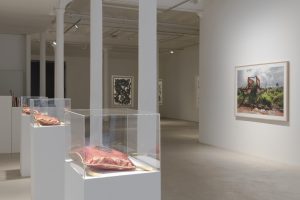 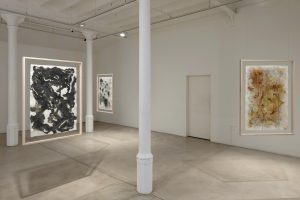